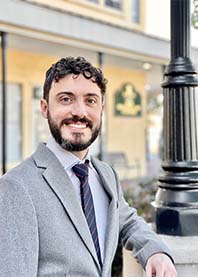 After graduating from the LSU Law Center, Bryan moved to Lyon, France where he earned an LL.M. in International and European Business Law. Prior to joining Sullivan Stolier Schulze, LLC, he practiced in the area of energy law, drafting sophisticated contractual agreements for large entities and representing clients in complex litigation appeals before circuit courts and the Louisiana Supreme Court. In less than two years, Bryan was the principal drafter of two successful Louisiana Supreme Court writ applications, one on contractual interpretation and the other on ownership of real property.

A seventh generation South Louisiana native, Bryan began learning French at six years old and earned his bachelor’s degree in French Literature and Political Science from Millsaps College in 2011. Between college and law school, Bryan worked for five years as a bilingual tour guide, giving historic tours in French and English to visitors from around the world. Bryan is a former Ambassador of French in Louisiana and continues to actively promote Louisiana’s historic language and culture by helping to advance the cause of bilingual education and literacy in Louisiana and by serving as a Lafayette Preservation Commissioner and Board Member of the Preservation Alliance of Lafayette.

Bryan is admitted to practice before all state and federal court in Louisiana.